Things are humming along here.  Work has been so crazy that I've hardly had time to focus on the fact that we're about to have a B.A.B.Y.!!!  Every weekend we've had something to do as well (with this weekend being a wedding in Philly that N was shooting), so we've not finished setting up the nursery either.  Talk about feeling behind!  Ay yi yi!

Anyways, I'm TRYING to not stress about it all, but this week has been extra tough with deadlines and other stuff happening at work.  And in spite of my best intentions, I have to admit that I let the stress get to me on Friday night when N and I were walking to our car and realized that it had been towed.  We had just walked three blocks with the dogs, our clothes for the wedding, a box of stuff for storage and other misc when we realized the car was gone.  Needless to say, I had a complete meltdown.  It started off about the car, but ended with work, frustration with NYC, time for planning for the baby, upcoming parenting, etc.  All I can say is that now [two days later], I'm only now starting to feel recovered from last week.  Maybe it was all the dancing and drinking at the wedding last night that lifted my spirits and made me feel whole again.

One little bit of solace last week though was that I was on a job with an acquaintance of mine who when someone asked him about the impending arrival of his twins said..."I'm freaking terrified!!  It's two of us, two dogs and now two babies in a NYC apartment!"  I chuckled to myself, and thought..."Me too!!  But at least we're not having TWINS!"  Hah!!

Anyways, on a VERY positive side, my wonderful friends [with kids] have been giving us so much stuff lately that it's hard to believe we're even going to need a baby shower!  Before heading to the wedding yesterday, we stopped at a friend's house in Philly and she gave us a huge box of baby clothes and toys. Clothes that had never been used and receiving blankets that had never been un-packaged!  And our shower is in two weeks!  I don't know where we're going to put it all.  So tonight I came home and began sorting it into sizes and putting the bigger stuff into plastic bins for later.  I can't believe what awesome friends we have!  I can't wait for her to get here so we can dress her up and kiss her little tummy.  And to make us laugh we dressed our Boston Terrier in a few hilarious pieces of baby finery.  Here's a pic of him trying on his baby sister's little bonnet!  LOL!! 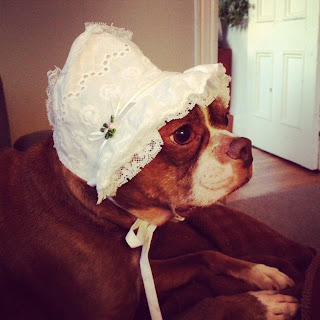 (You can tell he loves wearing it, right?!)

And last but certainly not least, I chatted with B today and she says that the baby seems to be doing good and is quite the active baby!  She says that she's more active than her previous four and is always moving and kicking.  She thinks we're going to have an active munchkin on our hands.  But I just think that the baby is a long, tall sally and looking for more wiggle room. We'll see once she gets here! 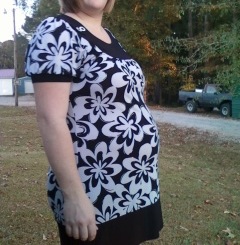 I think she looks small, but then again...what do I know!? I can't believe tomorrow is 34 weeks!!  Talk to you all soon!