Where it all began: My Infertility Story

It all has to begin somewhere, right?  I mean, all of us dealing with infertility have a story...and it's only in the past few years where I've really started to understand how many different versions of the story there is:  Endometriosis. PCOS. MRKH. Asherman's Syndrome. Swyer's Syndrome. Turner's Syndrome. Not to mention all the different forms of cancer.  And then there's me.  Just one of the crowd.

When I was a kid, I couldn't wait to start my period so that I could look like all the pretty grown-up ladies.  I was a BIG fan of Barbie, and definitely prayed that God would be benevolent and give me "big boobs."  However, by the time I had turned 16 and still not started my period (much less gotten those big boobs I was so desperate for)...I was beginning to get WORRIED.

My previous family doctor had always told me not to worry.  It was "no big deal", and things would happen when my body was ready.  But my old doctor (emphasis on the word old) had since retired, and I was becoming increasingly impatient and worried.  My new family doctor gave me a pelvic exam, and then promptly sent me to the gynecologist with no diagnosis.

Turns out I was right.  It wasn't a good sign.  My new gynecologist didn't really tell me what was wrong at first.  She took some blood work, did a pelvic exam...and sent me on my way to  summer camp.  All I kept thinking the entire week I was away at summer camp was that I was so excited to get back home and hopefully they'd be able to give me a pill to kickstart my period.  Hopefully things would be a-ok very soon!

Well, when I got home from camp...I went straight to the doctor's office.  She informed me that my long-awaited period was never coming because my "ovaries were twisted," and that they "hadn't formed properly in my mother's womb."  Because of that, I needed them removed immediately or they'd turn cancerous.  Oh, and by the way, I had no fallopian tubes or uterus, so I could never have a child.

No big boobs, and now no children either?!!?!  I basically didn't leave the house for an entire summer. My mother refused to accept it, and I never told anyone.  I felt so ashamed.  Worried that I would never be loved, and that no one would ever want to marry me.  After all, who would want someone that was so broken?

Finally, after two years I was able to accept it and have the surgery done to remove "my twisted ovaries."  It was 5 months after my 18th birthday.  I'd finally had my first kiss that summer by a boy I'd been in love with for years.  I never told anyone that I was even going to the hospital to have the surgery.  I just wanted it all to be done so that I could forget.

After that my body had no way of producing any hormones, and I was put on hormone replacement therapy.  I'm still on it to this day.  But it took YEARS for me to finally learn the TRUTH about what was/is wrong with me.  My doctor wouldn't tell me.  My mother (if she actually knew) wouldn't tell me.

It turns out that I have a genetic disorder called Complete Androgen Insensitivity Syndrome (Complete AIS). It means I have XY chromosomes, yet I'm a girl!  I didn't even know it was possible.  I'd never heard of such a thing.  And it's taken many years to gather the courage to tell anyone...period.  In fact, if my infertility came up somehow, I'd give a blase answer about cancer.  (So, yeah...basically I lied.  But it was...and still is....easier.)  Besides my mom and my doctors, my husband was the first other person to know the truth...and it took me years to tell him.  I was so ashamed & worried how people would react because it's not something anyone ever talks about.  I didn't want to be bullied or asked silly questions about whether or not I was a guy.  So yeah...no one talks about weird genetic idiosyncrasies like mine on the other infertility & surrogacy blogs...and to my knowledge, I'll be the only AIS blog that I've found on the internet.  After all these years of secrecy, it feels strange to put it out here like this, and the only reason I'm doing it is because I know there are a number of other women with AIS who might want to choose surrogacy and egg donation too...and I hope that my story will help someone.

Now I've grown to accept it for what it is...another one of the causes of infertility.  It's no longer the identity crisis that it once was, and it's something that I've known about and lived with for 20 years.  In fact, I feel lucky to not have had to try [and fail] with IVF treatments.  We knew straight-away that if we wanted "biological" children, this would be the way we'd have to do it. 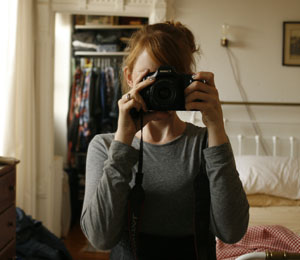 All I know is that I'm so grateful that this option exists for us.  I'm so grateful that there are women out there that will donate their eggs to another couple, and that someone is willing to carry our child. At 16, I felt like the world was over...but what I realized is that it was just changing.  It wasn't what I'd thought it would be like, but life has been GREAT so far!  I can't wait for the next chapter in our lives to begin!