Just to recap, I am planning on inducing lactation for our baby that is now due in 175 days!!  (We're 15 weeks today!  Whoppppeeee!)  I'm using the Newman-Goldfarb method to induce lactation with the "Regular Protocol for Mothers over 35" also called the "Menopause Protocol."   (Though you can understand why my vanity might not allow me to refer to it that way.  Haha.) Also, to recap, I'm on HRT (hormone replacement therapy) so that factors into things a bit here as well.

First step.  Talk to my doctor.  I FINALLY got him on the phone about this b/c I didn't want to drive all the way to South Jersey for an appt.  He only knew a bit about this process, and suggested I look up the "Lenore Goldfarb method."  I laughed and told him that I already had, which is why I was calling to talk to him.  He was fine with all of the protocols, so I went on to the...

Second step.  I stopped my HRT.  Basically the estrogen in my HRT reduces the amount of milk that will be produced.  A friend successfully breastfed using this method, but kept with her HRT during the time of breastfeeding.  She said it severely limited her milk production, so she (and Lenore) recommended that I stop it during this time.  (Side note, I'm taking a Calcium supplement to help replace the calcium my bones may lose during this time.  For some reason I have always had a brain blockage against taking vitamins.  Probably b/c I already feel I have to take one everyday.)

Third step.  Start the Provera and Domperidone combination.  (Provera 2.5mg per day + 10mg domperidone 4 x per day.)  Seeing as how this is Day 3, not much has really happened yet.  I have noticed a bit of dry mouth from the domperidone, but I'm trying to drink more water...which is something Lenore suggested anyways.  Next week I'll be increasing the domperidone dose to 20mg 4 x per day.  Will need even more water.

I bought my Domperidone (Motilium) and Provera from a pharmacy online based in New Zealand called inhousepharmacy.biz.  Domperidone isn't common in the U.S. and is only available at certain compounding pharmacies, plus my insurance is kind of sucky sometimes about prescriptions...so I went with this option.  The meds came really quick and look perfect.  Here's a pic of what you can expect from them if you order the same meds.  (Note this pic was taken once I'd already opened them and started taking my meds. It didn't come with opened containers!) 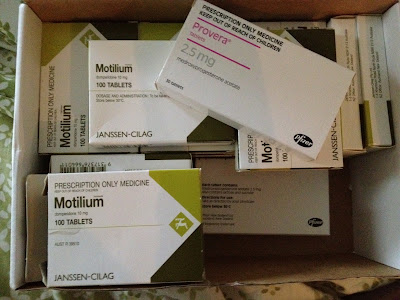 So yeah...not much to tell at the moment other than joking about how I'm finally going to be a Double D.  Haha.

As a plus, my friend let me have her breast pump (and a Moby Wrap too)!  I'll be keeping everyone updated on the progress, especially since it seems to make people weirded out when I've said anything about breastfeeding the baby.

And again...for anyone looking how to induce lactation, here's the protocol I'm using.